The Importance of Geography

Dinas Emrys means "Fort of Ambrosius." Geoffrey of Monmouth tells us that Merlin was also called Ambrosius. Hence the Merlin connection. Let us revisit Geoffrey for just a bit:

Merlin enters the scene as a prophet, uttering the Prophecies that foretell the death of Vortigern, the kingship and death of Uther, and the success of Arthur in driving the Saxons from the shores of Britain. Merlin's most famous utterance in this series of prophecies is the tale of the two dragons. Vortigern, worried about the encroachment of the Saxons (whom, ironically, he invited to the Cliffs of Dover), is trying to build a fortress on a hill. The fortress will not stay up. His seers cannot tell him why. They tell him that he needs to spill on the hilltop the blood of a boy with no father. Merlin fits the bill but turns the tables on his would-be assassins when he predicts the location of a pool beneath the fortress and in that pool two dragons. The red dragon and the 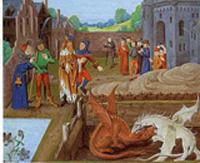 white dragon fight to the death, it would seem, before the white dragon turns tail and runs. The red dragon is, of course, the Pendragon, the "head dragon" of the leaders of Powys, Vortigern's land. The white dragon is the Saxons. Merlin saves himself and becomes an advisor to Vortigern and then later Ambrosius, Uther, and Arthur.

But is this story true? And if so, where was Vortigern's Tower? Historians believe that it was Dinas Emrys. We have already mentioned the name connection. Excavations at Dinas Emrys have uncovered a Roman building and near it a man-made pool. Geoffrey tells us that two dragons fought; this could very well have been true, dragons being described as all manner of large lizards in those days. The pool is there, and there is a Roman connection. The story of Merlin and Vortigern and the dragons and the prophecies could very well have been just another example of local history's being transformed into national history.

Explorations in Arthurian History and Legends